I know it's your favorite time of year and the laughter

And cheerful spirit reminds you of trips around the sun

But today I wanna make sure it's just right

'Cause right now's a present you only get once

The world can be so cold

But I got so much love it's lighting up the fire inside my soul, so baby

For this Christmas don't need wishes

Not since I met you (It's just Christmas time)

Every season you give reason to love you

From December back to June

It's just Christmas time (Come on)

Let's make it the best time in our lives

Even when the rain is falling outside

Some people want diamonds and pearls

But I don't really need the whole world

Underneath the tree, just need to be your girl

The world can be so cold (Yeah)

But I got so much love it's lighting up the fire inside my soul, so baby

For this Christmas don't need wishes

Not since I met you (It's just Christmas time)

Every season you give reason to love you

It's Christmas in June

I mean Christmas is all the time when I'm wit' you

Rihanna - Lift Me Up Lyrics

Rihanna - Lift Me Up Lyrics

Burning in a hopeless dream

Hold me when you go to sleep

Keep me in the warmth of your love

When you depart keep me safe

Drowning in an endless sea

Take some time and stay with me

Keep me in the strength of your arms

Keep me safe (Keep me close)

Burning in a hopeless dream

Hold me when you go to sleep

Lift me up (Lift me up, in your arms)

Keep me close (Hold me, hold me)

By Lyrics
Email ThisBlogThis!Share to TwitterShare to FacebookShare to Pinterest
Labels: Rihanna

Candlelight shines inside the pumpkinhead

Waiting on the borderline

Please don't be afraid, or it's gonna end

I lie, I panic, my mind wreak havoc

I cry, can't manage, I did my damage

My crime so heavy, my sin left baggage

Liar, cheater, and a killer

Never meant to cause 'em damage

I'm lookin' at me in the mirror

I see myself and start to panic

They don't even recognize me

When they see me comin', all they see is (Fame)

They don't know behind these Cartiers

It's just a little boy full of (Pain)

Push me 'round, put me down

Touch the ground, took me out, yeah

And I should've called James White

Flew into Memphis to hang out with soup

And tell him that all ain't right

But I was afraid

The devil like to feast on all your sinful feats

One too many drinks, tell my mama "Peace"

Death deserve my feet, let me rest in peace

Candlelight shines inside the pumpkinhead

Waiting on the borderline

Waiting on the borderline (Don't be scared, don't be afraid, don't be—)

They can mistreat us, but they'll never take us from Jesus

He'll never let 'em defeat us, they know that they'll never beat us

God washed away all my evil

Turned me into a believer, you better believe it

Put some more time on my meter, I cannot wait 'til we meet up

They cannot kill us, stop us, or condemn us

They want us livin' like we ain't the winners

They keep on tryna tell us that don't ever help us

'Cause we all a bunch of dirty sinners

It go up on my side, all this weight on my mind

Don't you try and bring up my past, 'cause God erased my timeline (I'll be fine)

Heh, ready for war, I put it all up on the line

Too scared to fight, then go let David kill Goliath

Walk through the valley, but the Lord is by my side

He heard my cry

By Lyrics
Email ThisBlogThis!Share to TwitterShare to FacebookShare to Pinterest
Labels: Lecrae

By Lyrics
Email ThisBlogThis!Share to TwitterShare to FacebookShare to Pinterest
Labels: Tekir

Ayy, it's DubDaddy on the track

Not a rapper but I thought I'd have a crack

Another song, another bar, another stack

We keep coming back, now we're picking up the slack

It's Halloween bitch, it's time to get made

Better lock up or you're gonna get slayed

Ayy, The Boys are coming in

Hey everybody, my name is JoshDub

When I don't do crime, I talk shit at the club

I like Corona, no lime, and having a tug

I get my bread, no crust, cause you know I'm a thug

It's Halloween, my girl cooking clean

Doing flips in the sheets, call that trick and treat

In the back of a Bentley and we got on rings

The Boys in town and we hunting clowns

Couple kings with a couple crowns

It's Mully in the back and your bitch is getting plowed

Smoky and cold on this dreadful night

But we got some beauties in our sight

We love the shadows, and fear the light

But we'll steal your girl with one quick bite

On Halloween, you can hear many sounds

Some screaming, some crying in the background

But if I see some kind of creepy clown

Oh you better believe it's going down

Got these demons in my head overwhelming me with fear and dread (dread, dread, dread)

Screaming in my bed, keep me grinding till' I'm dead (dead, dead, dead)

Trick or Treat, excuse me, what the fuck is this

Got a blanket to protect me, and a wooden cross

I sprinkle holy water to show demons who's boss

I make videos to scare all the kiddos

And I'll exercise your Tía with a bag of hot cheetos

Made Pennywise feel two and gave Huggy Wuggy a hug

I got good at hide and seek, you can always ask the Fed

I put poison in your goat, now that chupa cabra's dead

I live in the States, born in Monterrey

Got a gringa by my side, she can cook some frijoles

I crossed the border and la migra said "Hey"

"Come on down, but you just can't stay"

Running and hiding and working and fighting

You don't got the papers to even be trying

All the witches they be on me, with glee

When I walk up in the room it's a party

Got no reflection but there's one thing you can see

Our competition running scared as they should be

Never giving out our secrets so like (hush, hush, hush)

We be stealing all your candy in a (rush, rush, rush)

Dropping songs and videos that always ([?])

By Lyrics
Email ThisBlogThis!Share to TwitterShare to FacebookShare to Pinterest
Labels: TheBoys

Cursed you as I sleep talked

Spineless in my tomb of silence

Tore your banners down

And maybe it was egos swinging

Maybe it was her

Flashes of the battle come back to me in a blur

All that bloodshed, crimson clover

Uh-huh, sweet dream was over

Tears on the letter, I vowed

Not to cry anymore

If we survived the Great War

You drew up some good faith treaties

Drank my poison all alone

You said I have to trust more freely

But diesel is desire

You were playing with fire

And maybe it's the past that's talking

Screaming from the crypt

Telling me to punish you for things you never did

So I justified it

All that bloodshed, crimson clover

Uh-huh, the bombs were closer

The burning embers, I vowed

Not to fight anymore

If we survived the Great War

It turned into something bigger

Somewhere in the haze

Got a sense I'd been betrayed

Your finger on my hairpin triggers

Soldier down on that icy ground

Looked up at me with honor and truth

So I called off the troops

That was the night I nearly lost you

I really thought I'd lost you

We can plant a memory garden

Place a poppy in my hair

It was war, it wasn't fair

And we will never go back to that

Uh-huh, the worst was over

We're burned for better, I vowed

I would always be yours

'Cause we survived the Great War

I will always be yours

'Cause we survived the Great War

I vowed I will always be yours

By Lyrics
Email ThisBlogThis!Share to TwitterShare to FacebookShare to Pinterest
Labels: TaylorSwift I hope you like it and, wherever you are, you'll meet me at midnight

By Lyrics
Email ThisBlogThis!Share to TwitterShare to FacebookShare to Pinterest
Labels: TaylorSwift 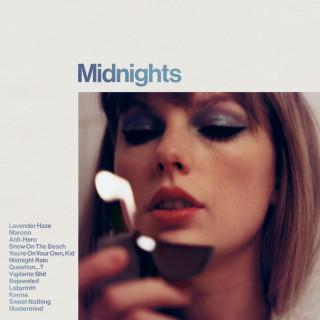 I washed my hands of us

You made a mess of me

I pictured you with other girls

Then threw up on the street

You just start walking on

They say that if it's right, you know

Each bar plays our song

Nothing has ever felt so wrong

It hits different this time

I used to switch out these Kens

Rip the band aid off and skip town

Now the sun burns my heart and

The sand hurts my feelings

And I never don't cry at the bar

Yeah, my sadness is contagious

I slur your name til someone puts

Me in a car

It hits different this time

I find the artifacts

Cried over a hat

Cursed the space that I needed

I trace the evidence

Make it make some sense

Why the wound is still bleeding

You were the one that I loved

Don't need another metaphor it's

This is why they shouldn't kill off

Dreams of your hair and your

Stare and sense of belief

In the good in the world, you once

And I felt you and I held you

Bet I could still melt your world

I heard your key turn in the door

Is that your key in the door?

Or have they come to